The rail operator, Danish Railways, earlier told Denmark’s TV2 that the victims were passengers on a train going from the city of Odense, on the central Danish island of Fyn, to Copenhagen when the accident took place about 8 am local time.

Danish media reported that a tarpaulin on a freight train hit the passenger train, which was going in the opposite direction, prompting it to brake violently. Police spokesman Arne Gram said the passenger train “hit an unknown object,” but did not further comment.

Photos from the scene show the freight train was carrying crates of beer, and the tarpaulin that covered the train was torn in pieces. Kasper Elbjoern, spokesman for Danish brewery group Carlsberg, confirmed that a freight train transporting its cargo was involved in the accident.

Jesper Nielsen, who was on the passenger train, told Denmark’s TV2 the train “was out on the bridge when there was a huge ‘bang’ …. very quickly thereafter, the train braked.” (AP) 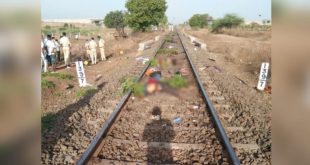 This post has been read 6967 times! People look at a damaged train inside Ramsis …