KUWAIT CITY, Dec 1: A large number of expats working for Ministry of Education held a sit-in yesterday to protest against the non-payment of their salaries for about 5 months. They urged the companies to expedite the disbursement of their salaries which has been held since July, so that they can meet their financial and living obligations reports Al Rai.

Fahad Al-Hayan, Director of Services Department, reacted quickly to the workers’ protest, responding to their pleas, where he made great efforts and intensive contacts with the competent company, called his representative and issued a first warning.

Al Hayyan said that the necessary measures have been taken regarding the workers and the agreement with the competent company to pay their salaries as soon as possible.

Assistant Undersecretary for Administrative Affairs and Administrative Development, Rajaa Bouaraki, explained that the Ministry of Education has paid all its financial obligations to the company providing the cleaners and that the company had been already contacted and urged to resolve the issue.

Bouaraki pointed out that the General Services Department met today with the company officials, where they promised to hand over all the financial dues of the workers in their salaries.

She stressed the need to redress all workers of all categories and give them their financial and moral rights and activate the terms of contracts with companies as the law is the law of contractors.

Bouaraki confirmed that the General Services Department has communicated with the General Authority for Manpower to take the legal procedures followed in such cases against the company, for delaying the payment of employees’ salaries. 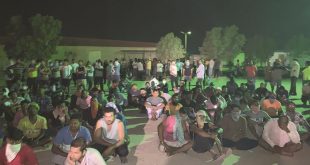 Demonstrators back at Erada Square

Kuwaitis out in their numbers at the Erada Square to protest against corruption, unemployment and …