‘Projects proceeding according to the timetable’

KUWAIT CITY, Feb 15: The Public Authority for Roads and Transportation (PART) said a total of 22 projects are currently being implemented by the authority, the most important of which is the Wafra Road, the Seventh and Sixth Sabah Al-Ahmad City and the Sixth Ring Road and the Al-Salmi Road at a total cost of 2.4 billion dinars, reports Al-Anba daily quoting sources.

The source explained among the most prominent future projects with PART include, the metro and railway project, and that the related documents are being studied by the global consultant who has been entrusted with this task in addition to coordinating with the relevant authorities in the metro and railway project, including the Ministry of Oil and the Kuwait Municipality Public Authority for Agricultural Affairs and Fish Resources (PAAAFR).

Meanwhile, the old roads and walls in Mubarakiya Market are decorated with technical tableaus and graffiti; thereby, adding the beauty of history to this traditional and vital market, reports Al-Jarida and Al-Shahid dailies. The paintings and graffiti with fresh colors depict the old shops along the roads in the market. 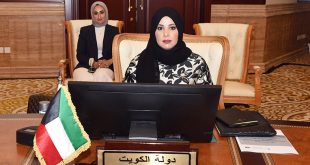