KUWAIT CITY, Oct 22: Kuwait Fishermen Union Chairman Dhaher Al-Suwayan has confirmed the return of sea pirates and robbers in a remarkable way, such that armed robbery happened in more than 20 fishing vessels in less than three days, reports Al-Qabas daily. In a press statement, Al-Suwayan disclosed: “Many fishermen in Fahaheel and Sharq no longer want to fish due to the lack of security for them; especially since the pirates usually steal all the fishing equipment, navigation devices, air conditioners, personal properties and their catch for the day — fish and shrimp.”

Share
Previous Eggs aplenty, why hike in prices?
Next Automotive sector in Kuwaiti market greatly affected by rise in dollar 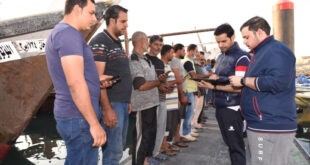