The blast in the town of al-Bab took place near a bus station where people often gather to travel from one region to another, according to the opposition’s Civil Defense, also known as White Helmets.
The explosion caused widespread damage to buildings in the area and set vehicles on fire in the town located in Aleppo province, activists said. The victims included a number of women and children, the report by Turkey’s Anadolu news agency said.

“The blast was in the middle between the (station), residential homes and a small market,” said an activist based in northern Syria who goes by the name of Abu al-Haitham.

The Civil Defense said the blast killed 19 and wounded more than 80.
The Britain-based Syrian Observatory for Human Rights, an opposition war monitor, reported that 18 people were killed and 75 others were wounded in the attack. It added that some of the wounded were in critical condition and the death toll could rise.
Differing casualty figures are not uncommon in the aftermath of explosions in Syria.
It was the latest in a series of attacks in Turkish-controlled areas of northern Syria that have killed and wounded scores of people. Turkey has blamed a Kurdish militia group, known as the People’s Protection Units, for the attacks.

There was no immediate claim of responsibility for Tuesday’s attack, but Anadolu said local security officials were looking into the possibility that it was also carried out by Kurdish militants.
Last month, an attack on a Turkish Red Crescent vehicle in al-Bab killed a member of the aid agency and wounded another. Armed masked men wearing camouflage clothing traveling in two cars without license plates attacked the Red Crescent vehicle as it traveled through the town.
Turkey-backed opposition fighters took control of al-Bab in a military offensive in 2016 that was launched to drive out Kurdish fighters and Islamic State group militants from a border area

Share
Previous ‘We must face challenges in unity & solidarity, be loyal to the leadership’
Next 3 scientists win Nobel physics prize for black hole research 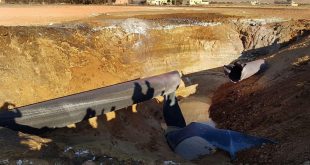