KUWAIT CITY, June 12: Personnel from the Ahmadi Criminal Investigation Department (CID) have arrested 12 workers for stealing sand in the Sabah Al-Ahmad area and referred them to the competent authority. According to a security source, the CID men, in coordination with the Municipality, raided a site where the men were at work filling sand in trucks sand from an open area close to Sabah Al-Ahmad and arrested the ‘men at work’ and referred them for interrogation to find out who was the mastermind behind the theft.

On the other hand, a security source said the Ministry of Interior is in the process of deporting four Bangladeshis who were caught stealing construction material from houses under construction in the suburb of Al-Mutla’a. The men were reportedly caught redhanded. 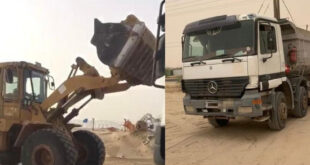