The Criminal Court recently issued its ruling on the largest real estate fraud case, sentencing an Iraqi company manager to 10 years in prison, and five years each for his Kuwaiti wife and his brother, in addition to KD3 million fine, while protecting the rights of those who fell victim to the fraudulent sale of Khairan chalets through exhibitions licensed by the Ministry of Commerce, reports Al- Seyassah daily.

According to the case file, the results of investigations revealed that the accused do not own the land, the chalets were built without a license, and electricity was supplied based on forged licenses. The number of victims of the scam reached more than a thousand Kuwaitis who purchased chalets and shops for tens of millions.

Attorney Ali Al-Ali said that with this ruling, the judiciary put responsibility on the government and the National Assembly to implement court rulings and the law by tracking the money and returning it to the rightful owners, as well as compensating those affected by the scam, while the concerned government officials must be held accountable for failure to monitor real estate exhibitions 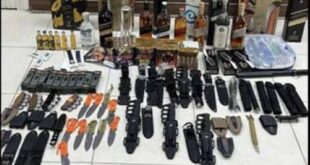