‘Govt using Freedom of Speech Law against Kuwaitis, instead of using it to protect them’

KUWAIT CITY, Aug 1: In a bid to clarify issues concerning citizens prosecuted by the judiciary for defending their country through spoken word while nothing happens to foreign bodies that offend the nation and its people, MP Omar Al-Tabtabaei submitted queries to Deputy Prime Minister and Minister of Foreign Affairs Sheikh Sabah Al-Khaled.

In a press conference at the National Assembly Media Center, Al-Tabtabaei pointed out the ministry is powerless in this regard, citing the foreign policies and Freedom of Speech Law that the ministry follows. He asserted that this is just an excuse as foreign policies do not apply on the above mentioned issues, considering some foreign statements are deemed offensive to the nation and its people while the government prosecutes citizens for responding and defending Kuwait.

He said the government is using the Freedom of Speech Law against Kuwaitis, instead of using the law to protect them. He stressed that it is unacceptable for the government to be merciless toward citizens, while being considerate and complaisant toward those who offended the country.

He added the Freedom of Speech Law contains fl exible articles that are being bent and taken advantage of by other countries against Kuwaitis. He hopes the proposed amendments to the law, which are being reviewed by the concerned committees, will see the light in the next legislative term. 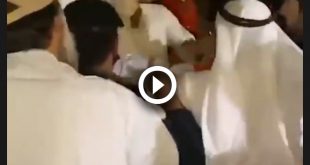 Police intervention at Erada was to implement SOPs

A little girl, man and the dog in New York